Journeyman British boxer Tony Bellew has stated: “I want a war,” in the build up to his career-defining bout against unified cruiserweight world champion Oleksandr Usyk.

The 35-year-old is coming into this fight off the back of two dominant displays against former heavyweight world champ David Haye, stopping both fights before the final bell despite being seen as the underdog. Bellew’s career record coming into this fight is 31-2-1 (21 KO), however he is undefeated at the cruiserweight level. His counterpart Usyk is the current unified world champion in the division with a record of 15-0 (11 KO), and is regarded by many as the best pound-for-pound boxer in the world, having won every possible title he could have at both amateur and professional level.

Usyk is the odds on favourite for this fight and retaining his belts, as the Brit comes towards the swan song of his career. “I’m at the back-end now and have been punched in the face for 20 years, I have a few more nights left,” responded the Liverpool heavy-hitter in a recent interview with Sky Sports. Bellew has predicted that “there will be blood and pain” and feels that he can take home all the belts regardless of his underdog status. 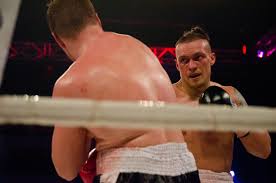 The agreement to a fight of this stature is everything that boxing fans could wish for with a champion looking to prove himself against an old figurehead of boxing, putting the challenge of experience against the skill and athleticism of a young fighter who is yet to lose.